Award for excellenceKirby and the Forgotten Land 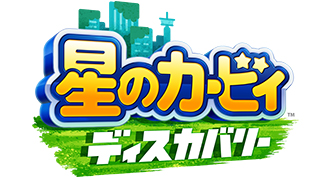 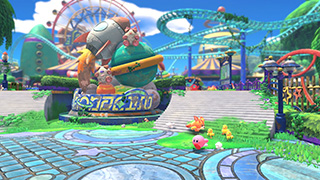 This is the first 3D platformer action game in the Kirby of the Stars series.

The story takes place in the “New World,” where a civilization and nature have fused. Kirby starts a quest to rescue Waddle Dees kidnapped by the “Beast Pack” and moves around freely in stages.
Familiar actions of “Inhale,” “Copy Abilities,” and “Hovering” are evolved. In this play, a player can pass a Joy-Con controller to a friend to help out in “co-op play.”

This is the first 3D platformer action game in the “Kirby of the Stars” series.

◆New Action “Mouthful Modes”
“Mouthful Modes are special actions Kirby can make when he inhales an object such as a car or a vending machine scattered in the new world. Depending on an inhaled item, Kirby stretches into its shape. This action is very helpful in searching a stage and rescuing Waddle Dees. 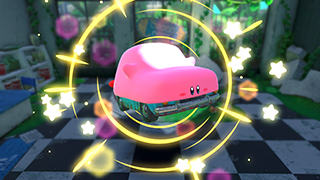 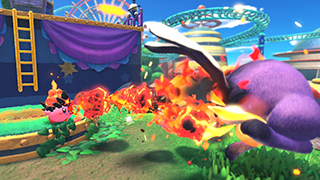 This year is the 30th anniversary of Kirby of the Stars.
We owe everything to your long and kind support of the “Kirby of the Stars” series!
We are deeply moved by a fact that we could deliver this game full of new challenges in the milestone year: 30-year anniversary.

This is the first full-3D action-packed game in the main story series. We aimed at creating a wider and deeper game than the past 2D series with higher quality and easier operational feeling than what the “first” 3D game is expected. We hope more people enjoy the game.

We challenge various things. The art includes the world view where civilizations became ruins. Songs in otherworld languages are included in the sound.

At the same time, we used experiences accumulated in developing video games for non-portable game console. We believe we could utilize the experience in Kirby and the Forgotten Land.
I will make new challenges with the Development Team members in the future, so that this game can be a step of the further growth of the “Kirby of the Stars” series.
Thank you so much indeed!!